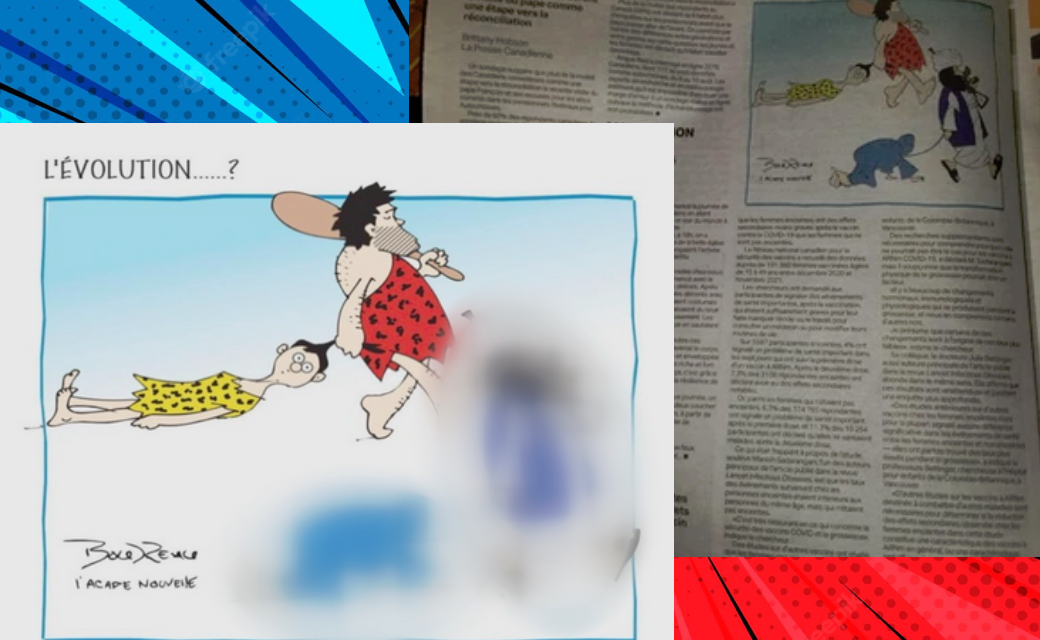 Recently  l’Acadie Nouvelle, an independent French-language newspaper in New Brunswick published a cartoon in their newspaper that shows a caveman on one side and a Taliban on the other side; both are pulling women towards an unknown destination. Some make the correlation that this is rude and it is an Islamophobic cartoon because it shows a woman being degraded to an object or god forbid an animal by a Talib. Unfortunately the general public gets emotional and does not think about the reality on the ground and shows an emotional reaction towards the cartoon without having a clarity on what Taliban are truly doing.

For years, ISIS, ISIL, Boko Haram, and even Taliban have come up with their own abusive laws that degrades human beings and is worse than slavery and all of a sudden a cartoonist has done something Islamophobic. We do not agree with the action of cartoonist same way we do not agree with the actions of extremist groups, but it is important to understand who is doing the worse action?

General Muslims around the world get upset if a cartoonist draws such cartoon, but do not even raise an eyebrow when they hear about child slave markets in Afghanistan, Women being used by the extremist groups for sexual purposes. Many women were burnt by ISIS & ISIL for being followers of Shia- Islam, many followers other faiths were butchered for not accepting the Wahabi, Salafi school of thought in Syria and Iraq, Many women were forced to tolerate group rape, many women had to share sanitary supplies with many other women, many women are are prevented to obtain education by the Taliban, and funniest of all; women were asked to bring a male figure with them to Bazaar ( shopping centers ) when they wanted to do their routine shopping even if that male figure was a rooster, and all of a sudden a french cartoonist becomes degrading?

The hypocrisy most people live in is saddening and upsetting. we the Muslim Ummah  ( nation ) need to wake up and accept the brutal truth; either we defend the voiceless women, children and men who are being abused by the extremist groups, nor no one else would. The amount of abuse these UnIslamic extremist groups have brought to those innocent people is partially caused by the tolerance of Muslim Ummah ( nation ) and our acceptance of their actions. This is not a defense to what a cartoonist has written, instead it is call to action to unite our forces and raise our voices against the brutality of extremist groups in general. Enough is Enough.

We ask the Muslim around the world to become more involved in eradicating the extremist groups that have misused name of Islam and have advanced their ill actions. Islam is a religion of peace, advocates for prosperity, peaceful coexistence people helping each other to uplift the needy and build a bright future. Extremist groups have used name of this peaceful religion to advance their agendas and Muslims are paying the price. Extremist groups like ISIS, ISIL, Boko Haram & Taliban are the true Islamophobic groups here.

We also ask Muslims to get involved in negating the actions of extremist groups by infusing the society with positive actions and to shed light on true Islamic culture, a culture of forgiveness and love.