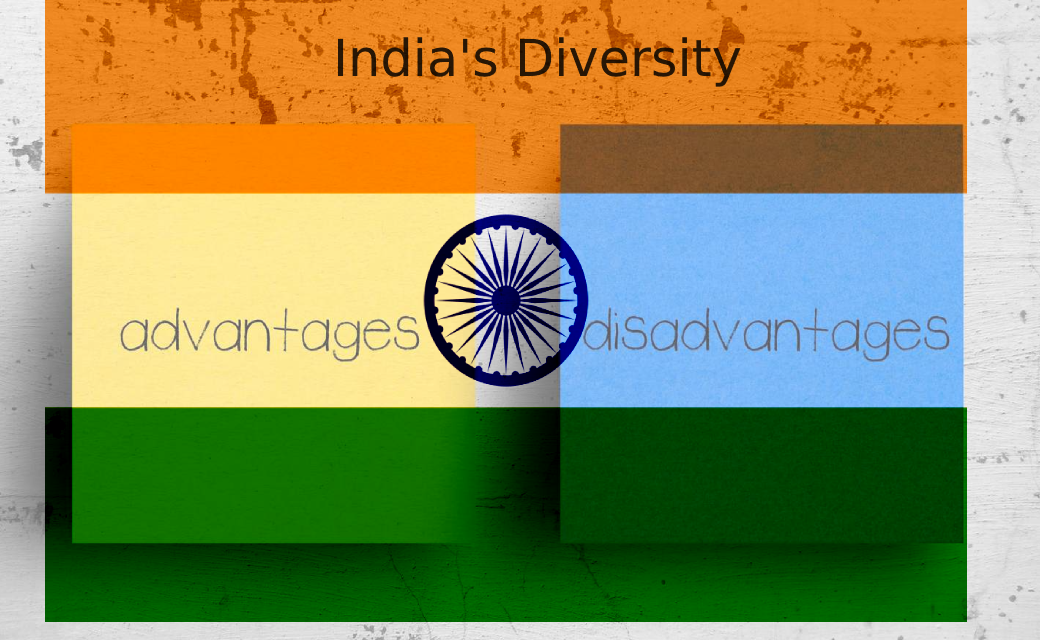 World’s second country as far as population  is India. Not only India has a population of over 1.3 billion people, it is also titled the most diverse country  on Earth when it comes to number of Gods and religious devotees. While 94% of the world’s Hindus live in India, there also are substantial populations of Muslims, Christians, Sikhs, Buddhists, Jains and adherents of folk religions. There are over 33 million Hindu Gods in total and this is devotees to Hinduism alone. One may ask, is India’s diversity to its advantage or disadvantage?

India is in a very unique position hence its management of this diversity needs to be customized for India’s population as opposed to a copy of another country’s methods to treat its population. We encourage this uniqueness to be viewed as an advantage which can propel India forward in many ways and / or slow down its competitive advantage in today’s world.

we should distinguish between separatist groups and individuals who seek to live in peace. Freemuslim’s Inclusion Forum analysis shows there are individuals who incite violence and unfortunately violence only leads to more violence. People tend to live in harmony with each other if there are violence incited any opportunists to destroy the unity of people in India. These opportunists may be individuals or politicians who seek to gain followers even if that is at the expense of the general public. Recent Hijab restriction targets all Indian Muslim and it does not solve any issue. Decision by the court to ban Hijab ( or any other religious symbols ) effects over 195 million people ( ~ %14.9 ). Muslims are inseparable part of India’s history and this limitation only creates a turmoil which slows down India and engages it in a domestic dispute which would never be solved, not without human casualties or negative financial impact on the country as a whole.

Indians have been freedom seekers thorough out inception of India, and only by up-keeping the diversity and pluralism India can stay competitive. Freedom seeker does not mean becoming separatists, but instead it means living as a free human being and coexist with others peacefully. There is a saying (Hadith) in Islam: People are either your brother/sister in religion or they are equal with you in creation. Any judge or court that shows a bias against a percentage of society based on their race, religion, faith, gender, age or ethnicity is inciting domestic violence.  Gandhi rose the spirit of love, compassion, harmony, peaceful coexistence and tolerance for others while having self respect, and it was his peaceful nature that inserted into hearts of millions of people not simply his desire for change.

Freemuslim’s Inclusion Forum asks Indian Muslims to remain peaceful while they protect their houses, business, and families and promote peace. vise versa we ask other religious devotees to promote peace instead of violence as there is absolutely zero benefit to violence. In today’s competitive economic, social and political fields, if one person/entity/ political party breaks India’s unity, it is intentionally or unintentionally slowing down India’s competitive advantage.